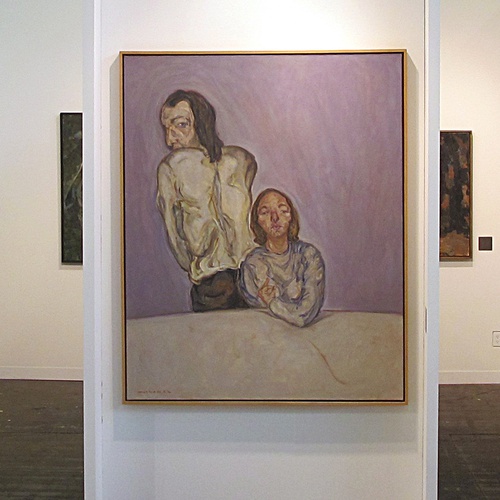 Meem Gallery is pleased to announce their participation in the 2015 edition of established New York art fair, The Armory Show. The Armory Show has chosen to continue their FOCUS section of the fair, looking at the MENAM region and curated by Whitechapel Gallery Curator, Omar Kholeif.

Meem Gallery will present a selection of key works by Syrian artist Marwan. Marwan is well known for his distinctive style and monumental paintings, utilizing the recurrent themes within his self-portraits, portraits, figures and silhouettes. Each decade since the 1960s marks a new chapter for Marwan, developing his style, technique and concerns. By bringing together important works from the 1960s to the 1990s, Meem gallery will curate a focused booth that exemplifies his artistic practice and production.

Marwan first exhibited in New York in 1976, in a solo show at Gruenbaum Gallery. Since the late seventies, he has participated in an abundance of solo exhibitions internationally, including the Museum of Modern Art in Baghdad, 1980, to the Institut du Monde Arab, in Paris, 1993, to his recent show at the Fundação de Serralves in Porto, 2014. It has been some time since Marwan’s work has been displayed in New York, leading to the decision of Meem Gallery and Marwan to participate in The Armory Show, and present a group of works that retrospectively consider the artist’s oeuvre.