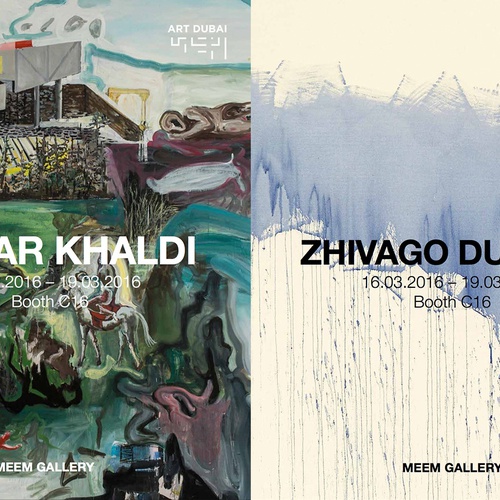 Meem Gallery is delighted to announce our participation in the tenth edition of Art Dubai, from March 16th – 19th 2016, exhibiting the work of two contemporary artists; Berlin-based Zhivago Duncan, and Dubai-based Jeffar Khaldi.

Migration has been at the forefront of human consciousness over the last two years - the exodus of peoples from Syria, Iraq, South Asia and North Africa to Europe being the most reported-on news stories of 2015. It is within the concept of borders/migration, that Meem Gallery selected specific works to explore how two artists approach ideas of borders, both geographical and hypothetical, and how this relates to the idea of belonging in the human consciousness.

In the work of Zhivago Duncan, it is often the actual material and technique that he uses that references his exploration of borders. In his 2014 series, Your Love Reminds Me of Mortality, Duncan uses unusual materials such as stitched canvases, rabbit size and ink on canvas - to create works that appear discolored. He later alters the works, adding another canvas, stitching the works together to create one, or adding a new material that was not originally envisioned.

The second work by Duncan, Where the Mountains Break Geometrically, visualizes a pastel landscape of loose squares, sitting awkwardly amongst one another; allowing the artist to explore these concepts of separation, borders and cultures.

In the work of Jeffar Khaldi, we turn to the 2008 oil on canvas, Promised Land. The title is loaded, immediately bringing forth Biblical imagery and referencing current Middle Eastern political hostilities. The work itself shows a lone figure on horseback, entering a contemporary landscape. The viewer is left to consider whether or not this is indeed the ‘promised land’, and what marks it as so? The biblical ‘promised land’ was geographically described, but it can also be considered as a spiritual ideal, rather than a physical space. As with Duncan, Khaldi considers the ideas of borders, separation and the human focus on gaining a sense of belonging.