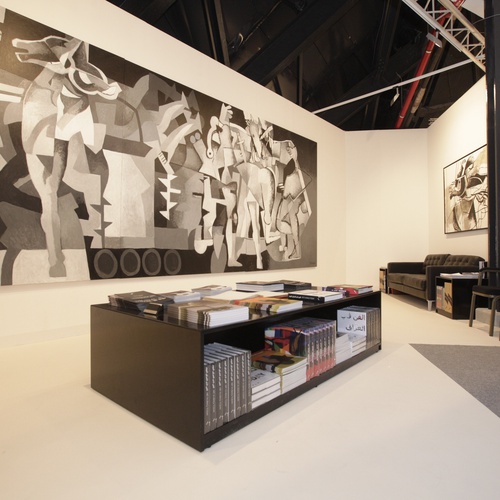 At this year's Abu Dhabi Art, Meem Gallery will exhibit two major works by modern Middle Eastern masters Dia Azzawi and Parviz Tanavoli. Azzawi's mural-sized painting Elegy To My Trapped City (2011) represents the decades of warfare and hardship endured by Baghdad and its people. Comprised of haunting composite monochrome forms, this work also pays homage to Al-Bayati's poem of the same title. Tanavoli's aluminium Big Heech (1973) is part of the fair's 'Beyond' section. The work, which is an outdoor, installation piece, is one of the few heech sculptures constructed out of metal.

Established in 2010, NIMEA is an outgrowth of the Al Noor Library (initiated in 2002) and Meem Gallery (launched in 2007). The institute's aim is to encourage public appreciation of modern and contemporary Middle Eastern art, and to preserve the legacy of the region's artists through the archiving, creation and collection of important resources and research material.