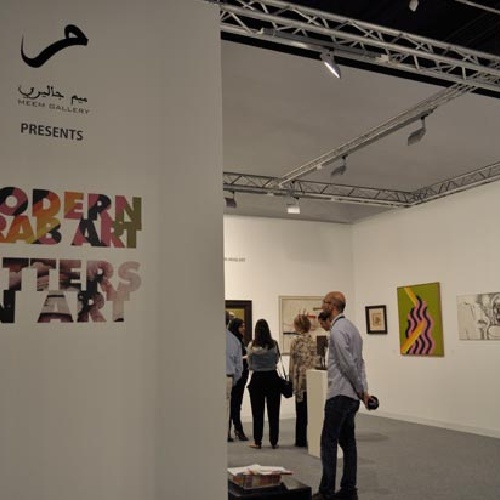 Modern Arab Art takes viewers through varying decades of twentieth-century modern Arab art production, starting with Al Said's work, El Norag of the 1920s, to an early work by Selim, c. 1950, and an untitled gouache on paper by Cherkaoui executed in 1959; paintings by Louay Kayyali and Gazbia Sirry from 1960 and 1967; works by Dia Azzawi, Ismail Fattah, Mohamed Melehi and Fateh Moudarres created in the 1970s, and finally works dating from the 1980s by Al Said and Salahi. The exhibition also traverses geographical boundaries by bringing together artists from Egypt, Iraq, Morocco, Sudan and Syria. The subject matter presented is equally diverse covering purely abstract work, the human form, genre scenes, landscape subjects and politically motivated works. Though the artists and subjects displayed are varied, this exhibition also highlights a number of intersections found in these artists' works and approaches, such as their interest in wedding traditional visual culture to a modern aesthetic.

Letters in Art explores the prominent trend of integrating Arabic and Farsi letters and calligraphic forms into modern and contemporary Middle Eastern art. More commonly known as Hurufiyyah, the exploration of the abstraction of words and letters has played an integral role in creating an artistic identity specific to modern and contemporary artists of the region. The artists displayed in this section of Meem's exhibition have all experimented with the letterword extensively; however, each artist and work presents a different interpretation of the written word. Ali Omar Ermes – who, like Mahdaoui, has dedicated his work to the exploration of letters – uses the literary culture and penmanship of the region as a point of departure, while Kamal Boullata's experience of exile prompted him to explore the Arabic letter, combining his knowledge of literature, poetry and religion with geometry, colour and form; Nja Mahdaoui's exploration of Arabic is predicated on the idea of deconstructing its etymological and linguistic meaning, and Parviz Tanavoli's iconic heech and poet series of sculpture demonstrate the way in which the aesthetic qualities of script can be manipulated and formulated into three-dimensional form.