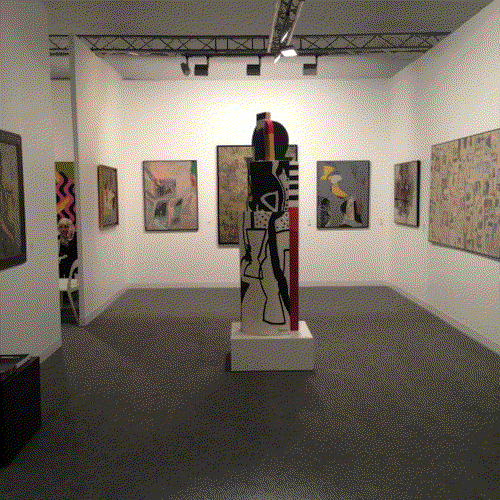 At this year’s Abu Dhabi Art Fair, Meem will exhibit the work of four important artists from the gallery’s roster: Dia Azzawi, Kamal Boullata, Mohamed Melehi, and Mahmoud Obaidi. The oeuvres of Azzawi, Boullata, and Melehi, all exponents of the region’s modern art movements, demonstrate how the 1960s generation of Arab artists wedded Western art practices (namely easel painting) with elements from their cultural heritage: Mesopotamian visual culture, literature and Arabic script, North African arts and crafts. Their more recent works, displayed at Abu Dhabi Art 2014, maintain a link to this early ideology but equally reflect the ways in which each artist has reassessed his contribution within a more contemporary context.

Dia Azzawi’s paintings, which date from 2008 onwards, demonstrate the artist’s more recent tendency towards pure abstraction while simultaneously exploring ideas relating to archaeology, a subject which has resonated with Azzawi from the start of his artistic career. The interlocking abstract shapes delineated in many of his paintings from the late 2000s seem to be buried beneath the earth’s surface, perhaps awaiting archaeological excavation. Similarly, the colourful waves found in Moroccan artist Mohamed Melehi’s works – the wave, which first featured in his work from 1963, is a leitmotif of Melehi’s oeuvre – display the artists continuing interest in abstracted signs and symbols culled from Moroccan arts and crafts as well as the classical elements of earth, fire, wind, and water. In his more recent paintings, Melehi’s compositions are busier and less controlled, creating unusual interactions between forms. Kamal Boullata’s triptych, Bilqis (2014), recently exhibited in his solo show at Meem (May – July 2014), beautifully represents the artist’s exploration of transparency and spatial ambiguity. Taking its title and subject from the Qur’anic legend of the Queen of Sheba (her name being Bilqis in Arabic), here Boullata, renowned for his for his formal experiments with the Arabic letter, uses the Qur’anic legend of Bilqis, most notably the aesthetic appearance of glass floors and glistening surfaces, as a point of departure for this work. In Bilqis, vertical and diagonal lines intersect at variable angles to create a horizontal composition.

Mahmoud Obaidi is part of the ‘eighties generation’ of Iraqi artists who studied under the guidance of second generation pioneers such as Shakir Hassan Al Said, Dia Azzawi and Rafa Nasiri. Obaidi’s work is from the series he recently presented in the Hajj: The Journey Through Art  exhibition held at the Museum of Islamic Art in Doha, 2013. Obaidi’s work is led by his conceptual approach to art-making. This enables him to experiment with a range of media as he is rarely confined by the materiality of the finished artwork. He recently held a solo show at Meem, The Replacement (2014), an exhibition that examined the transient role of power in the context of regional politics.

Meem Gallery has exhibited the work of all four artists at Abu Dhabi art previously and is pleased to bring their work together for this instalment of the fair. Azzawi, Boullata, Melehi and Obaidi’s work is held in major international collections including Mathaf: Arab Museum of Modern Art, Doha; Tate Modern and British Museum, London; Centre Georges Pompidou, and Institut du Monde Arabe, Paris; MoMA, New York; and Barjeel Art Foundation, Sharjah, to name a few.