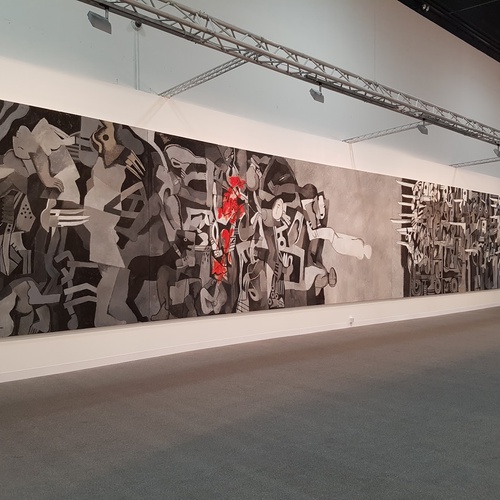 “The fire and blood blindly pouring over the living and the dead. Outlines of heads, legs, feet, hands—structured silhouettes and broadly outlined faces—overlap, piled on top of each other.”

Measuring 15 meters long, one large scale-work by Iraqi master, Dia Azzawi, takes a panoramic view of the 2003 invasion of Iraq. Based on images in the media, the artist reflects upon the tragedy faced by the Iraqi people in the aftermath of the bombing campaign and the subsequent collapse of the systems on which their daily lives once relied.

From the destruction of infrastructure and the looting of cultural institutions like the Archaeological Museum, Modern art collection and National Archive, to the savage treatment and abuse of prisoners in Abu Ghraib, Azzawi depicts the physical and psychological fragmentation of human beings undergoing such trauma.