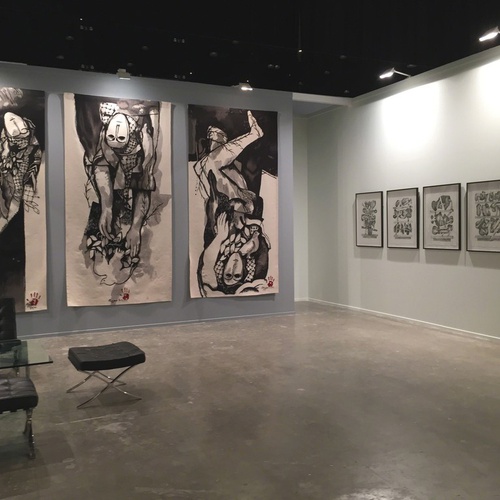 This year at Art Dubai, Meem Gallery will feature a solo presentation of Iraqi master Dia Azzawi’s recent work. Following on from his acclaimed retrospective exhibition at Mathaf Museum of Art & Al Riwaq Gallery, Doha, Qatar, the booth will show a selection of artworks in varying sizes and media.

The monumental Jenin Jenin takes centre stage, a large-scale tapestry comprised of three panels, each containing a twisted, androgynous human form. Based on a work on canvas, it was created in response to a massacre that took place in the Jenin refugee camp in the West Bank in 2002. The work pays tribute to the many martyrs of the slaughter, referencing the distinctly Palestinian Keffiyeh, olive branches and doves, symbols of hope amidst a tragic scene. The complex technique uses yarn to create intricate layers of monochrome tones that lend a cold, deathly atmosphere to the work. Azzawi has often referenced the plight of the Palestinian people in his work, a subject that was given an entire room at his retrospective in Qatar.

Adding to the theme of national identity and cultural reference, the painting, Villager’s Dress, inspired by the intricate embroidered garments native to Palestine hangs on the right hand side of the booth. A group of five works on paper titled Hanging Garden of Babylon are set to the left and refer to Iraq’s iconic, ancient wonder of the world. The compositions are executed in Chinese ink on handmade paper and made up of stylised organic forms that interlock and layer, one on top of another.

In contrast to the darker, more sombre works on view inside the booth, the two tapestries on the outer walls of the space burst with vibrant colour. Oriental Window and My Garden deal with familiar Middle Eastern domestic themes that are rendered in the abstract. Along with Jenin Jenin, they represent a relatively new foray into the use of textile in the artist’s work in collaboration with the renowned French Ateliers Pinton.